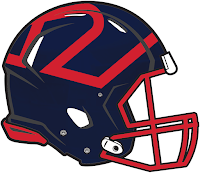 About three weeks ago I started a small project here where I started talking about the coolest football teams to never play in the NFL.  Teams were picked based on their success on the field as well as their branding.  Using these two very broad and vague descriptors allows us to put together a fantasy league that features the Philadelphia Stars, Orlando Apollos and the Iowa Barnstormers. 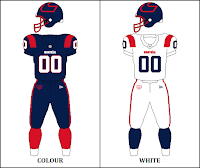 I tried to stick to just one team per league, but I wanted to get to twelve teams and I wanted to do it without scouring punk ass semi-pro leagues.  So that’s how we landed here, team 12, the Montreal Alouettes.

But, looking back through how the Alouettes have branded themselves over the years, it’s impossible to not include them on what’s essentially “the 12 coolest looking football teams that aren’t in the NFL” list.  The helmet at the top of this post is the most recent branding.  The new bird linedrawing logo, which looks very much like Ultimate Warrior’s face paint.  But the application to the top of the helmet is incredibly unique.  The team’s first helmet image being red wings on a white helmet.  The team transitioned into a very 70’s look, bringing on a red and leisure suit green with a linedrawing of a bird’s head, a logo that was very contemporary while it was in use, and may have inspired the logo that was debuted this season. 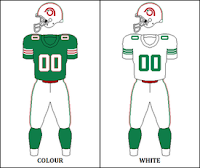 The team returned to their blue and red clash to stay in the mid 70’s, and with each look the team has stayed very in the moment with their color palette as well as their primary logo.  Their logos have hit the mark so perfectly with each passing design trend, that when the team started going back to classic looks in recent years, they’ve almost looked like “fauxbacks”.

The team has been marginally successful on the field, winning 7 Grey Cups dating back to 1949.  Unfortunately, over all those years, the team has had some turmoil in the office.  The original Alouettes ended up in the hands of a Vancouver-based businessman who mismanaged the team so badly, that the original Als basically went into receivership to the league.

Montreal Expos’ original owner Chris Bronfman was willing to own a Montreal CFL franchise, but did not want to do business with the previous owner, Nelson Skalbania.  The Als essentially folded at the completion of the 1981 season and were revived as an expansion franchise called the Concordes in 1982.  That version reverted to the original Alouettes moniker in 1986, but the city would again go football dark just two years later after the 1987 season.

It would take American expansion…and American contraction before the CFL would return to Montreal.  The Baltimore Stallions (who are also on this list) would move their operations north to Montreal after the completion of the 1995 season.  Though the league would not allow owner Jim Speros to bring the team’s history and records north, he was able to reactive the previously dormant Alouettes franchise, and continue that lineage.

And with that, we now have a 12 team Not the NFL League, featuring teams from 10 leagues and 3 countries.  There’s a lot of football in Europe and Asia that we haven’t looked at, so we may add an “international division” at some point in the future.

But here it is, after 3 weeks and 12 teams, our NNFLL.  Which teams should be in, which teams should be out?  Leave a comment.Eastern Division
Baltimore Stallions (CFL)
Birmingham Thunderbolts (XFL)
Michigan Panthers (USFL)
Montreal Alouettes (CFL)
Orlando Apollos (AAF)
Philadelphia Stars (USFL)