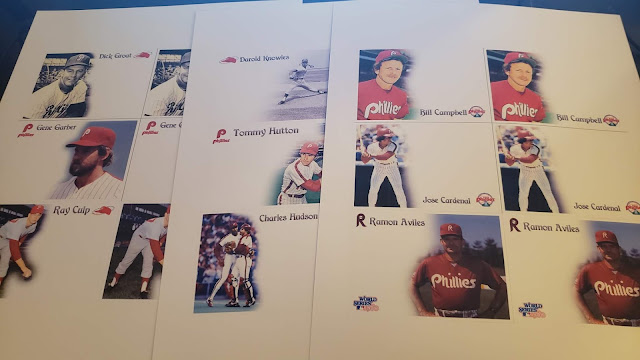 I’ve been dawdling on the TTM front lately.  And talking to Jeff Baker last week stoked some motivation.  I’ve printed and sent about half of the Phillies Frankenset.  But tonight, I ran 9 more through the printer.

Bill Campbell, Jose Cardenal, Ramon Aviles, Darold Knowles, Tommy Hutton, Charles Hudson, Dick Groat, Gene Garber and Ray Culp.  A handful of lesser knowas an players, Charles Hudson is the only one I remember seeing play as a Phillie, and Gene Garber is probably best known for his run with the Atlanta Braves.

When building the set, there’s been a compromise between player noteriety and TTM request success rate.  I’ve been opting more for players with higher return percentage than players who had longer or more popular careers with the Phillies.

I think it’s been part of the charm with building this set.  Finding a picture of Ramon Aviles as a Reading Phillies‘ coach, or Bill Almon at Spring Training for his one short run in maroon and white.  Then pair them with guys like Bobby Shantz, regarded as the best player not in the Hall of Fame, or Larry Christensen in the Saturday Night Special all red set.  It would have been easy to throw down a set full of Bryce Harpers, Mike Schmidts and Chase Utleys’.  But how that set would look like a lot of other sets.  But this set has Don Carman in a Peninsula Pilots‘ uniform, Tom Herr in a Lancaster Barnstormers‘ logo, Art Ditmar representing the freaking Philadelphia Athletics.

The set has been a great way to refresh my memory on the Phillies of the 80’s and 90’s.  And I have learned quite a bit about the team’s history, going all the way back to Curt Simmons and beyond.

Let this not be a eulogy for the set.  I am not hanging the template up on this one yet.  I think 50 or more returns before the end of the year is reasonable, especially if I get a litte more active in sending out in the next few weeks.

But, I will talk mechanically a bit.

First, the template was designed in PhotoShop.  It is one of two programs I would trust to design a quality custom card.  (Illustrator being the other, though I’ve never used Illustrator, so it’s a guess).  I would specifically not use Paint (or whatever it’s called now) or GIMP.

My template is  1050 x 750 pixels at 300 DPI.  This means that the image will reduce when printed and result in a sharper image when printed.

I try to find images at a larger size than the card, this way I’m not losing quality when I paste it into the template.

Printing I don'[t want to speak too much on.  Because printers vary wildly.  But these cards I’ve been printing, I’ve been printing on a 61 Lb photo stock.  It’s about half the thickness of a regular baseball card.

From there, I use an absolutely barbaric method of hand cutting the cards with scissors.

Brian Dawson, who goes by the handle RockiesFan33 is an absolute all star when it comes to customs.  You can find him on SCF, Instagram and Reddit.

Please check out all of his work on SCF, Instagram and Flickr.  He is a source of constant inspiration.