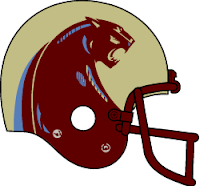 We’re looping back around on leagues now, and with the tenth entry in the Not the NFL frankenleague, we’re catching back up with the USFL.  There aren’t many modern era football leagues, but plenty of great teams we can still revisit.

Team number 10 in the NNFL is the Michigan Panthers.

Season one saw the Panthers struggle with attendance, hovering around 14,000 fans per game in a stadium that seats 82,000+ for football.  But despite the cavernous amenities, the team put up a 12-6 regular season record, including a 6 game winning streak in the middle of the year.  They then hosted and beat the Oakland Invaders in front of a fantastic crowd of over 60,000 at home, then they beat the Philadelphia Stars in Denver for the first USFL Championship.

The Panthers started the 1984 season like they were shot out of a cannon.  6 game win streak to start the year, in front of an average crowd of 40,000+ at home (an increase of more than double their previous year average).  But a 2-8 stretch in the back half of the season hurt attendance and saw the team stumble into their final post-season.  Attendance fell to just over 15,000 for the last home game in Panthers history.

On June 30th, Michigan lost the longest game in professional football history, dropping a triple overtime Division Championship game in Los Angeles to the Express by a 27-21 final score.  Before the 1985 season, rumors rippled through the USFL that the league was considering a move to a fall schedule.  Panthers’ owner Al Taubman was an ardent opponent of this idea, and knew that the Panthers would not survive a head-to-head challenge of the Detroit Lions (whom they shared tenancy of the Silverdome with).  A proactive Taubman was unable to find a suitable college facility that was interested in housing the team within the Detroit metro region.

With the owner of the New Jersey Generals strongarming the league into a fall schedule, Taubman quietly negotiated a merger with the Oakland Invaders that was dependent on the league voting to shift it’s season to compete directly with the NFL.  The vote succeeded and Taubman’s son announced the merger to the league, with the Invaders surviving the merger and Taubman controlling majority interest of the resultant franchise. 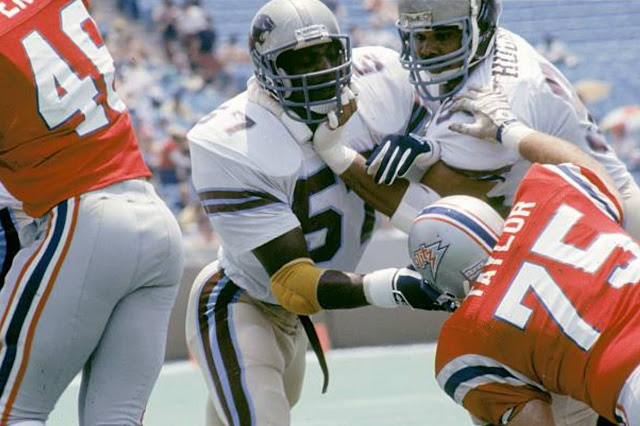 Taubman held on to a majority stake in the hopes of a positive result of a USFL vs NFL court case.  Unfortunately, his decision to abandon Detroit was a contributing factor in the jury’s $3 (three dollar) award to the USFL.

When the Panthers merged with the Invaders, we lost one of the truly unique brands and helmets in football.  The panther arcing up out of the earhole was a solitary look in professional football for 20 years.  Only recently have the BC Lions aped the look for their own purposes.  Even down to the negative space lines that featured heavily in Michigan’s primary logo.