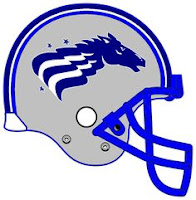 No single football has rattled the NFL’s cage more than the “Baltimore Football Club” (as they were known during the ’94 season).

Baltimore had been without a professional football team since the Colts split town under cover of darkness after the 1983 season.  An unannounced, and traumatic move that left a gaping scar on the city’s football community.  Baltimore successfully retained the name “Colts”, but there was no team to hang the name on.  That was until 1994 when the Canadian Football League dipped it’s toe into southern expansion. 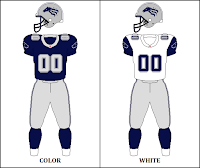 American expansion of the CFL began in 1993 with the Sacramento Gold Miners going 6-12, good for last place in the Western Division (but equal to the East’s second best team the Hamilton Tiger-Cats).  In 1994, 3 teams joined Sacramento; Shreveport, Las Vegas and Baltimore.  The Baltimore franchise, originally intended to be called the “Colts” faced legal challenges by the NFL and played a 12-6 season (2nd in the east) while battling the name fight in court.  Eventually, the franchise, owned by former Washington assistant Jim Speros, opted to use the former Colts colors and run as the Stallions.

The Baltimore Football Club was immediately successful on the field.  Speros stocked the coaching staff and roster with Canadian football veterans.  Coaches and players who understood the fine hair differences between the 3-down league and it’s American counterpart.  This lead to a team that was built to rattle league cages, to rattle it’s own league’s cage.  Powering through a successful inaugural campaign, the Not The Colts found themselves in an enviable position, the first non-Canadian team ever to compete for a Grey Cup.

With essentially the entire roster returning for the 1995 season, the Stallions charged through the regular season, winning the newly minted Southern Division, which was populated entirely by the American teams, with a 15-3 season on it’s way to winning the Grey Cup (something that no American team had done before or since, or probably ever will).

The Stallions were also successful off the field.  Baltimore’s rabid fan base rapidly adopted the team as their own.  Baltimore finished either first or second in the league in attendance in both of it’s seasons, supported not only by a fan base desperate for quality football, but also pumped by the 1994 MLB baseball strike, which cost two months of the season, giving the city just one sports option to pay attention to during the early parts of the football season. 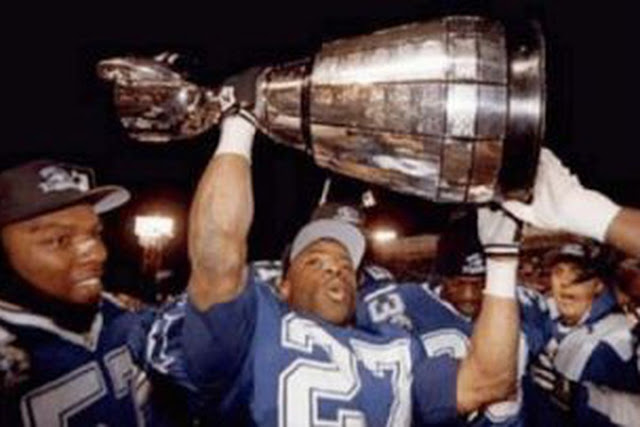 After the 1995 season, the CFL decided to contract all but two of it’s American teams.  The plan being to place the Stallions and the San Antonio Texans (who finished second in the South in ’95) would be moved to the east.  The plan fell through as the Cleveland Browns‘ owner Art Modell moved his franchise to Baltimore.  Modell’s team would displace the Stallions from Memorial Stadium, a facility that would soon be replaced by B&T Bank Stadium for the newly-minted Ravens.

Jim Speros moved his operation to Quebec and claimed the dormant Montreal Alouettes franchise and helmed that team for a year before selling to the Als’ current owner Robert Whitenhall.  Because Speros claimed the dormant Alouettes franchise, the Stallions technically were disbanded after the 1995 Grey Cup victory.  But the Stallions’ left a lasting mark beyond their Grey Cup victory.  Stallions’ GM Jim Popp stayed on with the Alouettes, winning three more Grey Cups and 4 former Stallions, including head coach Don Matthews, have been inducted into the CFL Hall of Fame.

The Baltimore Stallions join the Philadelphia Stars, Orlando Apollos, Southern California Sun and Iowa Barnstormers in our Not the NFL Frankenleague.  Baltimore joins Philadelphia and Orlando in our Eastern Division.

If you want to follow along as we build our stat-free fantasy league, you can follow the Not the NFL label.