We’re putting together our Best of the Rest, the Not the NFL A franken-league featuring the best (or coolest) teams to tread the football landscape.

So far, we’ve featured the Philadelphia Stars and the Orlando Apollos.  You can see previous entries here. 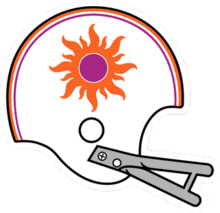 The WFL had nothing to fear, but Fears himself.

No, that’s not true.  Not even remotely.  The WIFFLE had many issues. Most were self inflicted.  Launching in 1974, the World Football League came only a few years after the AFL-NFL war, and five years on from the collapse of the Continental Football League.

Previous leagues had intended to go head to head with the NFL, with varying degrees of success.   The WFL, through the eyeglass of 50 years of distance, seems to have been the first league to truly attempt to establish itself as an alternative to the NFL.  This happened mostly in fairly innocuous ways, like the “dicker-rod“, and less in perceptible, and important ways, like player salary.

As far as the Southern California Sun go, please look at their wordmark, and be thankful with me that we (many? most? some? just me?) missed the Disco 70’s.  Just like the mid-80’s Stars, the Sun’s logo was perfectly early 70’s.  I can picture a designer, sitting in a giant rattan matahari chair with a paisley print shirt sitting in front of a giant piece of paper hand drawing the logo and hand inking it in.  The Sun aesthetic is absolutely dated.  The wordmark reminds me of everything my mom kept from the 70’s into the 80’s.  But the weird thing is, when I look at the uniform and logo, it feels very 90’s.  Orange and purple were both trend colors in sports in the 90’s.  In fact, the NBA‘s Phoenix Suns held on to their purple/orange clash until about 5 years ago, and during the 90’s their uniform was one of the most popular in the league  Adding to the 90’s vibe is that logo that looks very much like it would be comfortable as a lower back tattoo on someone who has very strong opinions about the band Godsmack.

Considering how garish and flashy the early to mid 70’s were, the uniform set here with the Sun is shockingly understated.  It would have been very easy to overthink the uniform set.  Especially when you consider the Wiffle is the league that brought you these referee jerseys and position-defined pants.  Fortunately for us, in retrospect, the teams presented themselves (when they could) in a very traditional manner.  Plain block jerseys with sleeve stripes and plain pants with similarly plain stripes were seen across the board.  I think that makes it very easy to go back and collect the league from an apparel standpoint.

On the field, the Sun saw success in both of the league’s completed seasons.  In ’74 So Cal went 13-7 in a hellacious 20 game/19 week schedule, clearing the second place Hawaiians by 4 games, and were the only Western Division team to finish above .500.  The Sun did themselves in during the post season when three players sat out their Quaterfinal match-up against Hawaii, claiming to be owed back pay.  A foreboding moment for a league that was near Romper Room levels of inept when it came to managing it’s finances.

The ’75 season saw the Sun, who were just 1 of 4 teams to return for season 2, jump out to another great start, winning four of their first five games.  However, league wide turmoil would see the WFL fold after week 12 with So Cal sitting again first in their division, this time with a 7-5 record, edging out the San Antonio Wings (7-6) by wining percentage.

Southern California football fans would only have to wait until the USFL‘s 1983 season to get another non-NFL pro franchise when the Los Angeles Express moved into the LA Memorial Coliseum. 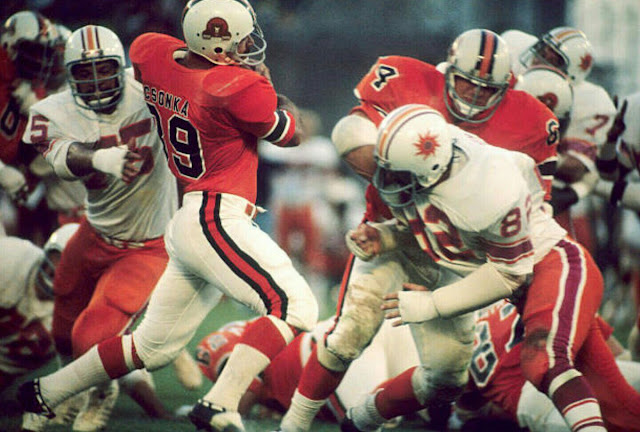 More recently, WFL & Charlotte Hornets historian Richie Franklin has put together a crew to bring an incredibly high quality WFL trading card set to market.  The WFL cards feature not just the players in the league, but the coaches, helmets, schedules and the “league jumpers” as well as some fantastic action cards.  As I keep teasting myself with the idea of jumping into the “oddball” football card collecting scene, these cards really seem to be the natural first stop on that road.  Especially as a “custom card designer”, it feels very right to support a crew that has taken the custom card design process out to the n-th degree.

Check out the WFL cards at cards.charlottehornetswfl.com.
Check in on all our Not the NFL entries here.