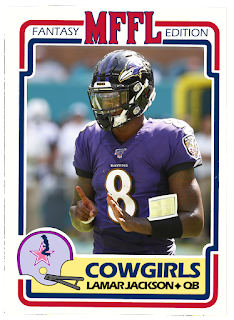 For most of the last 20 years, I have considered myself an alt-football fan.  I have enjoyed watching indoor, Canadian and semi-pro football when I’ve had the opportunity (and thoroughly enjoyed the AAF for as long as that lasted), but never really enjoyed the NFL or NCAA football.

But when I moved to New England, I started a fantasy league as a way of staying in contact with my coordinator at work, as he would be in a position to promote me, and I wanted to make sure he didn’t forget who I was while I was whiling away at one of his locations.

That’s how the Masshole Fantasy Football League was born.  I got promoted right before draft season last year, and was too busy to run the league, but after a career change this spring, I found myself with plenty of time to bring the MFFL back.

And this year, I’m taking it seriously.  During the first season, I decided that we were going to go big with the championship trophy.  The team that won got an undisclosed sum of money, and also a professionally made, custom 2ft x 3ft championship banner (which, according to his wife, “will never see the light of day as long as I’m around”.)

The MFFL drafted two weeks ago.  We’re a 12 team, .5 pt PPR league.  During our draft, I picked up Lamar Jackson in round 9 as a back-up to Matt Ryan.  Patrick Mahomes had gone #2 overall to my partner’s brother’s team Flutie Flakes.  So everyone’s quarterback strategy was immediately screwed up.  I went with Jackson as a back-up because I liked the synergy of Jackson coming off a week 8 bye into Ryan’s week 9 bye.  But then as I looked at the match-ups, and read some coverage, I started to like Jackson versus the Dolphins more and more.

During the preseason, I picked up the NY Jets DEF because I thought they would be stronger vs the Bills compared to my the LA Rams, who I drafted in the 11th round, against Carolina.  To be fair, I did not expect Cam Newton to shut down the way he did.

I don’t think anyone could have predicted the Ravens going off for 324 yards and 5 touchdowns.  Watching the early games on RedZone I just kept watching the stats stack.  Combine Jackson going nuts with the Jets’ defense freestyling on the Bills, I went into the early window half time period with 50 points just from my QB and DEF.  Add Harrison Butker‘s 17 points at kicker and Robert Woods basically holding serve with 12 WR points, and it didn’t matter that Zach Ertz was kept out of the endzone.  I was going into the 4pm games with a massive points advantage, and could basically use the Sunday night & Monday games as a victory lap.

I’m writing this during the second quarter of the Patriots/Steelers game, and as the Steelers take over in the final 3 minutes of the half, I’m up 101 to 84 with a 96% win probability according to Yahoo! Fantasy.  I have JuJu Smith-Schuster in action tonight, and am waiting on Josh Jacobs in tomorrow’s late game.  With Joe Mixon coming out of the Bengals game with an injury, I’m going to be watching Jalen Richard and Will Fuller closely.  If Mixon’s knee troubles him going in to week 2.  I already blew my waiver priority trying to put the squeeze on a team that was going into the Thursday night game with no wide receiver.  So I may have to make a move earlier than I would have liked.

So week 1 is almost in the books, and I’m in good shape.  To celebrate, I decided to do a custom set for my team, inspired in part by the Chachi Phillies sets.  I usually like to do original designs, or start with a design and twist it.  But I really love the 84 Topps USFL set.  So here is card #1, Lamar Jackson.