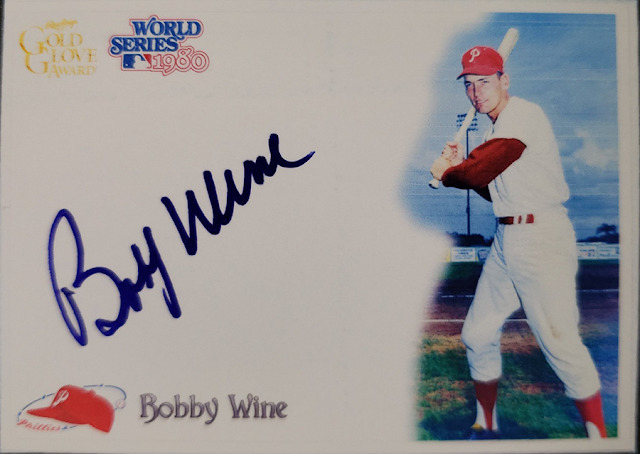 This is the longest I’ve waited for a return at 111 days. But for an 80 year old, Bobby Wine is still returning autographs for fans and still has a great, fluid, sharp signature.
Wine was a Phillies‘ amateur signing in 1957 and made his Major League debut in 1960.  He bounced back after 154 games and didn’t get back to Philly until ’62.  Despite chronic injury issues, Wine hung on, playing for the 1964 Phils who had a legendary collapse.  In ’69 Wine was sent to the expansion Expos as compensation for Larry Jackson, who chose retirement over playing in Montreal.  Bobby played three season for les Expos de Montreal.

After retiring Wine almost immediately went to work as a coach for the Phillies, helping the team rebuild in a worst-to-first from 1976 to 1978 and was with the squad through their 2 World Series appearances in the 80’s.

Bobby’s son Robbie had a cup of coffee with the Astros before becoming a coach (currently with San Diego), and his grandson Cory was drafted by the Phillies deep in the 2009 draft.

This is return number 29 and card number 30 for the Phillies’ TTM Frankenset we’ve been building since April.  I only sent Bobby one copy of this card (I always print two, and the other one did not cut cleanly).  If you want to see the rest of the Frankenset cards, click here.

Fantasy Football Content: What Do You Do When Mahomes Goes Two?