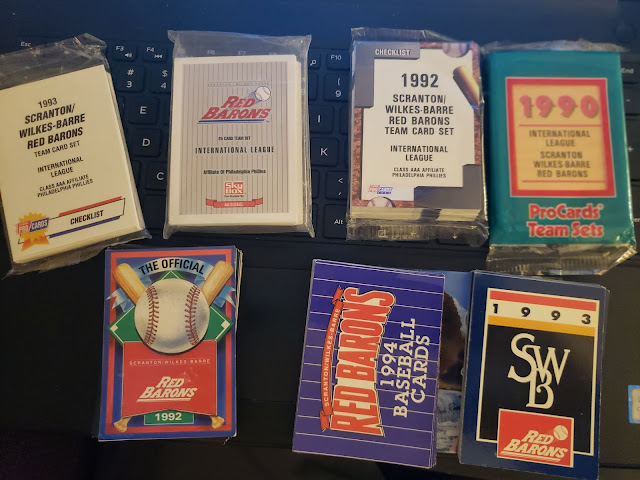 I’ve been on a team set splurge lately.  I’m working on collecting all the Phillies AAA team sets.  It started when I refound my ’88 Maine Phillies team set and saw a good deal on the ’87 Maine Guides set.  Then I got a really good deal on this lot of 7 Scranton/Wilkes-Barre Red Barons sets from 1990 thru ’94.  There are 3 ProCards sets, and a SkyBox set as well as 3 team issued sets.

I was really excited to get the 1990 ProCards set.  That packaging and design is one of the most iconic minor league set designs ever.  The ’92 SkyBox design was also very good.

Since this is an incredibly dry and boring post, I’ll tell you the story about the time I did play by play for “Mr International” Shonie Carter‘s pro wrestling debut.

About a decade ago I was working in MMA as an announcer and a also doing equipment sales.  I’m not going to tell you what brand, but if you’ve ever seen a picture of Felice Herrig wearing MMA gloves before she was signed to the UFC, she was wearing my gloves.

With the equipment manufacturer, I was sent to a “power sports” convention to sell some of our gimmicks.  We set-up across the aisle form a local independent wrestling promoter that was running a show at the con that weekend.  Because we had so much space, I set up my booth like a VIP tent for the wrestling show.

In the course of talking to the wrestling promoter, Johnny Cisco, he found out that I was doing some MMA commentary.  He booked Shonie Carter to make his pro wrestling debut that weekend, and he asked me if I would be interested in doing commentary with him on the event.

How could I possibly say no?

So Sunday afternoon for the matinee, my coworker and I show up and we rearrange our booth a little bit, steal some extra chairs and set up a little VIP section and I wander over to meet some of the boys and get ready for the show.

Johnny asked me to sit in on a couple prelim matches so I could get into the groove before the main event, which was Shonie Carter in a gauntlet style match against about a half dozen of the guys on Cisco’s roster.

During the first match, Johnny asked me to heel turn.  He was putting me over as an MMA guy, a scout that works with fighters, and blah blah blah.  Basically building me up as an MMA authority which added to Shonie’s credibility and helped bridge the MMA to pro wrestling gap, which hadn’t been done since Dan Severn and Steve Blackman (two guys I also had the pleasure of interviewing during my MMA career).

Most of what I did during those early matches was figure out which wrestlers were the heels and talk about how their incredibly athletic ability and skill set would transition so well to the more popular sport of mixed martial arts.

I honestly do forget most of the afternoon though.  I remember Shonie coming out in a kilt and a top hat.  I do also remember very vividly that he broke a kid’s neck throwing him in a very high german suplex.  During the post match interview, Shonie, who’s fight nickname is “Mr. International” kept using the line “dragging him into ‘international waters’.”

What I will never forget though is that after the show was over, I was in the locker room shaking hands (as is pro wrestling locker room tradition), and I had the opportunity to eavesdrop on Mr USA Tony Atlas and Shonie Carter discussing the difference between a ‘shoot’ german and a ‘worked’ german suplex.

The conversation took a hard and awkward left hand turn after that.  If you’ve heard some of the rumors about Tony, you can pretty much guess what I’m talking about.