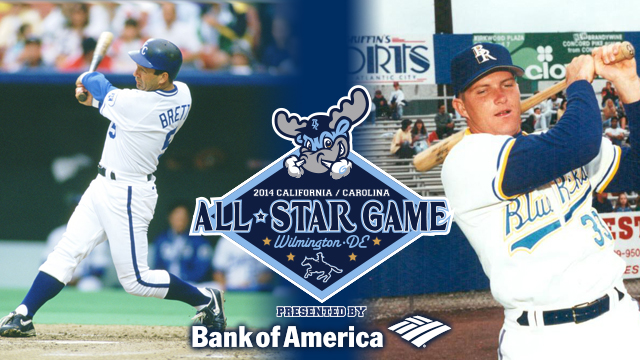 Writing about failures is a drag.  If you have any doubt, ask Bill Conklin.

On second thought, don’t do that.

Either way, instead of dedicating a post to a TTM failure, I’ve decided to use failures as a chance to share some stories.

Today’s story comes by way of a return to sender sticker that came on the request I sent out to former Phillies‘ manager John Felske.  I sent the request to Huntley, IL.  Looks like the postal service attempted to forward to Blue Eye, MO and the forward timer expired.

Now, on to a story about Ben Franklin, heat stroke, and the 2014 Single-A All-Star Game in Wilmington, DE.

My family has gone to Wilmington Blue Rocks games since the team was founded in the 90’s.  My mom and I would take the ride down I-95 South a couple times a year.  In fact, I was at a Blue Rocks game in April 2003 when Kevin Milwood threw a no hitter against the Giants.

But we’re going to talk about the 2014 California vs Carolina League All-Star Game.  The game was held on possibly the hottest day of the year.  It was also a day game, so there was no sunset relief.  That also means that introductions were done basically under the midday sun.  This is significant and also unfortunate, because introductions were done on the field by a local Ben Franklin impersonator.

The thing about this Ben Franklin impersonator is that he kind of looks like what we think Ben Franklin looked like, minus – I suspect – the copious amounts of STI’s.  His acting and public speaking abilities are somewhere between Ren Faire character and level 2 improv class member.  Our Ben Franklin avatar in 2014, complete in full dress, was also representing the elder statesman era of Franklin’s life.  Which is to say, and to put it nicely, he was no spring chicken.

All of these factors lead to what is the most confusing player introductions I have ever witnessed.

Unfortunately, Ben didn’t do any better.  The first four or five Carolina Leaguers were also members of this powerhouse Lake Elsinore Storm.  The rest of the Carolina League team were also introduced as representing the California League.

The Carolina Leaguers won the game, and with every run they scored, they gave us all an opportunity to experience Mr. Celery, a reminder that there are things in baseball more ridiculous than a team called the Modesto Nuts.

I genuinely forget most of that afternoon.  It was close to 425oF and I think about the 6th inning I reconstituted as a puddle of sweat.  But, I can tell you that if you’ve never experienced a Mr. Celery celebration, you truly have not lived.