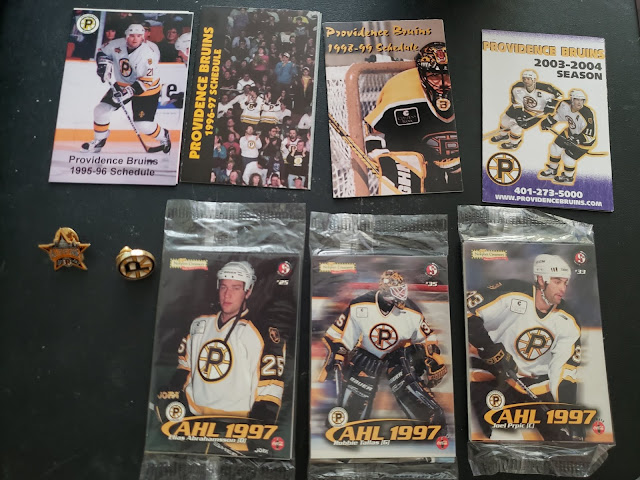 Won a couple eBay auctions on Sunday, in between doing laundry and watching the new Spiderman movie.  The first to arrive is this package, with a smattering of smalls from the Providence Bruins.  Going into my 3rd hockey season (which – as much as I do love baseball – I can’t wait for), and I think I’ve officially transitioned from being a Philadelphia Phantoms (RIP) fan to a Providence Bruins fan.  It’s easier to make the change, considering the Phantoms have moved twice since the last time I saw them as the “home team”.

This is also our first year as a partial season ticket holder.  We considered doing a full season, but we always use Groupon (and I always use the Acorns app to buy them on Groupon), so between the Groupon discount and the % back via Acorns, it’s cheaper to buy the tickets that way then it is to even have a full season package.

Regardless, we’re slowly adding some P-Bruins gear to the collection.  Here in this pack, we got a pocket schedules from the 1995-96, 1996-97, 1998-99 and 2003-04 seasons.  There are also 3 cello packs of cards from the 1997 Split Second team set (including a promo card for the AHL online presence at canoe.ca/ahl (dead link, don’t bother).  There’s nobody crazy showing, so I’ll probably crack these open and see how far along I am to having the team set.  I also got two P-Bruins lapel pins.  One is a straight forward spoked-P logo, the other is from the 1995 All-Star Game in PVD.

Look for some more eBay mail days in the next few days.  I’m adding some minor league baseball schedules and I hit for some modern Mike Schmidt cards for my PC.