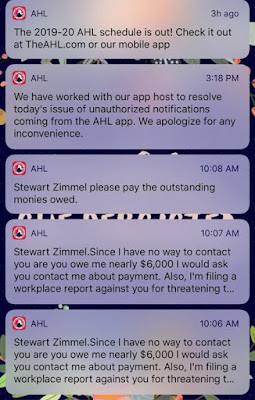 The day-long drama revolving around an anonymous poster and the American Hockey League’s HockeyTech-driven mobile app seems to have come to a calm and quiet conclusion.

The final flurry of rogue notifications came just after 10AM with the last push being a final request to Stewart Zimmel to “pay the outstanding monies owned”.

While HockeyTech’s social media was silent on the issue, the AHL released a very simple apology (via yet another push notification) that “We have worked with our app host to resolve today’s issue of unathorized notifications coming from the AHL app.  We apologize for any inconvenience.”

Then, what we all hope is the final push notification of the day came at about 4pm when the league released it’s 2019/20 regular season schedule.

The news broke nationally and was picked up by major outlets including Deadspin and the New York Post, (and also Reddit, though that was probably just for the upvotes and front page status) leading to a major black eye for the AHL despite their position as proxy to the app’s developer HockeyTech.

The AHL and HockeyTech are more closely aligned than just the APP, in 2018, HockeyTech partnered with the league to bring their league-wide web video streaming platform in-house.

It’s unlikely the breach will cost HockeyTech any of their AHL contracts.  But, while we’re rubbernecking today’s massive gong show, let’s take a look at this screengrab Sean Shapiro got:

This is what happens when you launch app now pic.twitter.com/d6WgHJBGja