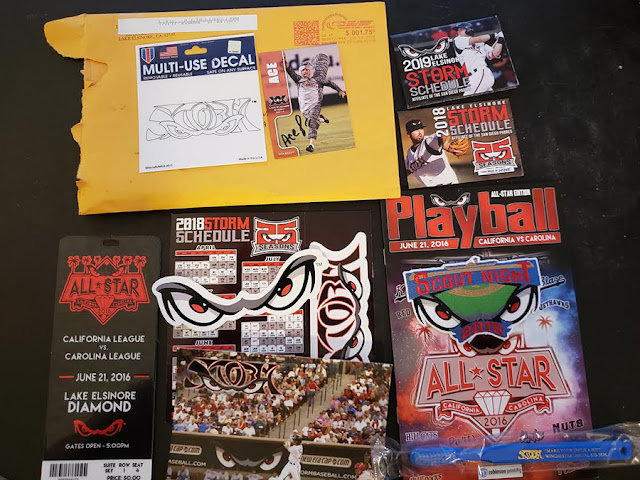 This is my favorite fan pack return I’ve gotten.  There’s a lot of cool stuff to unpack here.
The Lake Elsinore Storm are the A+ California League affiliate of the San Diego Padres.  And aside from having mixed feelings about their “eyes” logo, the Storm really haven’t cracked my personal baseball zeitgeist in a while.  In fact, the last time I had any interaction with the Storm was during the 2014 single-A All-Star Game (which pits the California League stars vs the Carolina League stars) in Wilmington Delaware.  That year the Blue Rocks hired a local Ben Franklin impersonator who was either drunk, or suffering from heat stroke, who introduced every member of the California League squad as from the “Lake Elmore Storm”.

The Storm hosted the game in 2016 (a late June date, which seems very early for an MiLB ASG).  And they were kind enough to include a really high quality plastic ticket/credential from that game (which I can add to my 2014 Single-A ASG ticket from Wilmington).  There is also an All-Star edition of their “Playball” game day magazine, which looks great.  We’ve also added a a schedule magnet to our growing collection (which has a pop-out diecut logo magnet attached).  Two more pocket schedules, 2018 & 2019 were included.  I’ve gotten my first autographed card return from a fan pack, this one coming from Storm mascot “ACE” (the self proclaimed fastest squirrel on earth).  A “angry eyes” logo sticker, wordmark reusable decal, postcard and a toothbrush round out this 11-item fan pack.

As far as fan packs go, particularly for minor league, this one is great.  Based on what was included, it seems like the intern went fishing for some cool stuff.  Reached deep into the back of the promo closet for the ticket and magnets and probably saw the toothbrush and thought “Yup, we’ll throw that in, too”.