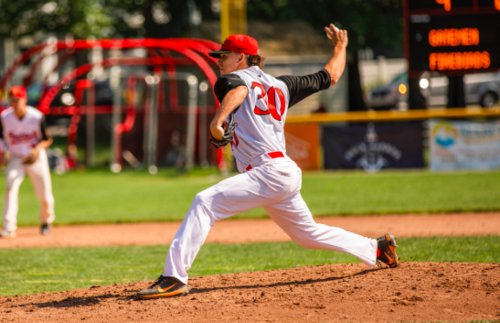 The prevailing theme of the first two weeks of the Cape Cod League season has been “Rain”.  Lots and lots of rain.  15 games have been washed out already, including a Double Header Day twinbill between Harwich and Y-D.  4 new doubleheaders have been added to the slate, check team schedules for those.

The weather has had a significant effect on the league’s attendance, down a couple hundred on average to less than a thousand a game.  I expect those numbers to escalate as the summer gets thoroughly underway this weekend.

Some players on the Cape are starting to make some noise (when we’re able to get games in at least), including:

Darren Baker (2B/OF) – Wareham Gatemen
Darren, who is going into his senior season at Cal already has an indelible World Series moment. He was the young Giants batboy who JT Snow scooped up at home plate to prevent him from interfering in a play at home during the World Series. The younger Baker is beginning to make himself as a speed skill outfielder with contact/average bat. He played 7 games for Brewster last year, but he’s contributing in Wareham to the tune of better than a hit per game with a pair of doubles and a triple through a dozen games.

TJ Collett (1B) – Brewster Whitecaps
Collett was a 40th rounder to the Twins in 2016 and opted college to play at Kentucky. He’s been slowly improving his draft stock, popping off for 20 homeruns and 74 RBI’s in sophomore & junior years for the Wildcats. Last season he spent the summerwith the Amsterdam Mohawks in the PGCL. This year he moved to the Cape where he’s gone for 3 homeruns, and is lowering his strikeout rate.

Logan Allen (SP) – Harwich Mariners
Not the Padres’ Logan Allen, this Allen is coming off his junior year at FIU. In 3 games on the cape, he’s been near-perfect, pitching 15 innings giving up just 2 unearned (in a 7-2 over Hyannis). He’s dialed in for 24 strikeouts against just 3 walks. He’s only faced Hyannis and Falmouth, who are the West division’s bottom half. We will have to see if the rest of the league can catch up to the lefty.

Brandon Pfaadt (SP) – Wareham Gatemen
Pfaadt has been next to godliness in Wareham in 3 games out of the bullpen. He’s given up 2 hits and 4 walks against 16 strikeouts in 12 innings for the Gatemen. This comes after a sophomore campaign at Bellarmine where he went 3-3 in 22 games (2 starts) striking out 50 in 38 innings and giving up 38 hits. He moves to the Cape after spending his post-freshman campaign with Mankato where he was one of the Northwoods League’s top pitching prospects of 2018.

We are just midway through the third week of play on the Cape.  There is plenty of time for New England auto hawks and baseball fans to get over the Bourne Bridge to check out some great baseball action.