The NECBL is the second oldest of New England’s three summer college teams, and it feels very much like a middle child.  The teams have struggled to establish their identity, often splitting the difference between the community come together feel of the Cape Cod League and the low-level minor league presentation of the younger Futures League.

That said, the league does boast an ever growing list of alums in the Majors, though with the proliferation of summer leagues, they do share those players with other leagues.  The season runs from early June through early August with a 42 game regular season.

The New England Collegiate Baseball League, going into it’s 25th season, splits the difference between the Cape Cod League and the Futures League in their presentation of summer college baseball.  The Cape League, the stalwart of summer amateur baseball, presents their games as a community affair with no admission charge and a warm atmosphere welcoming of families and puppies and lawn chairs.  The Futures League eschews college ball as an amateur event and presents it’s product in a fashion familiar to minor league baseball fans.  The NECBL falls right in the middle.

In that regard, the NECBL lacks it’s own identity.  Some teams play on high school fields like on the Cape, other teams play in municipal parks – some with over a century of history.  For a stadium collector, there’s a bit of dissonance to me between playing at Paul Walsh Field and Cardines Field. 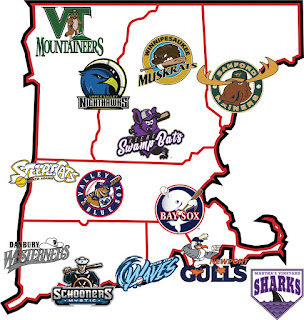 In what I believe is a regional first, a team has jumped leagues for the 2019 seaosn.  The Martha’s Veinyard Sharks dropped from the Futures League to join the NECBL for this season.  This brings the MV Sharks’ story full circle, as the team was part of the group that founded the Futures League in 2011 after the NECBL declined the Sharks’ expansion bid.  The Sharks leave a Futures League that has settled in to a great position, fielding franchises in several vacant independent league stadiums.

The Sharks join the league to fill a slot left vacant by the folding of the Plymouth Pilgrims.  Oddly enough, with the 1 for 1 move, this still leaves the league with an odd number of teams.

Of the teams that return for the 2019 campaign, three play in stadiums with historic significance.  First, the Newport Gulls play in Cardines Field.  The stadium, a wood and stone bandbox right in the heart of the chic beach town boasts a history that includes hosting barnstorming Negro Leagues teams.  Satchel Paige is said to have played at Cardines, and the story goes that he sat in a rocking chair to the side of the dugout.  During World War 2, the park’s proximity to Naval Station Newport allowed Major Leaguers like Bob Feller, Phil Rizzuto and Yogi Berra played in the Sunset League along side Larry Doby and Luke Easler, integrating the league several years before the National League finally broke the color line.

The Sanford Mariners play in Goodall Park, which was opened in 1915. In 1919 Babe Ruth hit a 3-run homerun for the Boston Red Sox in a 4-3 come from behind win over the Sanford Professionals in an exhibition game.  It was the last time The Babe dressed for the Red Sox before being sold to the New York Yankees.

The Valley Blue Sox have won back to back championships coming into the 2019 season.  They’ve gotten the best of the Ocean State Waves in both of those campaigns.  Six teams are competing for their first championship, while the Gulls are looking for their 7th.

For the second year in a row, the Mystic Schooners (who rebranded during the offseason), have partnered with H&H Distrubtion for Schooners’ brand drinks.

The 2019 All-Star Game is being hosted by the Vermont Mountaineers on July 26th.

The goal for baseball fans are two fold.  First, the NECBL does bring in draft quality talent.  It’s an excellent place to target prospects and autograph hawk.  The league is also a fertile ground for stadium collectors.  The historical fields are easy check-offs for your list and add depth of story to your collection.