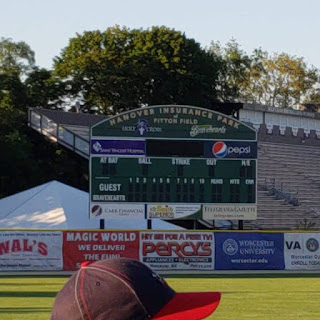 This is the first stadium review, and I’m really only writing it to share the story of the most ridiculous thing to ever happen to me at a baseball stadium.  But we’ll get to that later…

I visited Fitton Field, which sits on the campus of Holy Cross College and is home to not just Holy Cross, but also the Worcester Bravehearts, last summer.  It was a spur of the moment decision to make the drive out to Worcester, which lead to showing up between games of a double header.

If you follow New England baseball, you know that Worcester will be the new home of the International League Red Sox affiliate. It’s a shame, too, because McCoy Stadium isn’t the greatest park around, but there’s a lot of history, it’s got some personality, and the relationship between Pawtucket and the Red Sox goes back to before recorded human history.

My other issue is that Worcester is not an easily navigable city.  The DCU Center (which we’ve visited for hockey) is also a little difficult to get into from out of town.  I am very curious how the city plans on handling game day traffic when the Woo Sox (pls no) begin play.

To get a sneak peak at that traffic snarl, we arrived between games, and were following several vehicles into the garage next to the field, which is up a windy two lane road, and apparently we followed a work van that was just too tall to get into the garage.  The game seemed to be close to a sell-out, but what was odd is that it felt like there were more fans than the stadium or the team were prepared to deal with.  A great problem for a team, but a problem none the less.  Traffic and pedestrian flow was gnarling and frustrating, even when trying to accomplish a simple task like getting mustard for a hot dog.

The stadium itself is still in great shape, considering it’s only non-college tenants have been a Can-Am team (Worcester Tornadoes) and now the summer college Bravehearts. It is maybe a step below what you would expect from a single-A Carolina/California League level ballpark.  It has a unique view of the football stadium, which looks like a great place to watch a college football game.  The field itself appeared to be in great shape and there was a pretty robust grounds crew tending to the infield before game 2 started.

Concessions were considerable and expanded beyond the typical ballpark fair to “haute park”, including sausage and peppers.  But the concession stands were cramped and not adequate for a full house.  The souvenir stand was not bad, it was a stand, somewhere between a walk-by and a team store, but more than comfortable for a summer college level operation.

You may notice that the theme here is “the crowd here sucks”.  I enjoyed the game, the Bravehearts have a great product, but the baseball fans in Worcester are a delight. No, that’s wrong. What’s the opposite of that? The baseball fans in Worcester are terrible.  Our seats down the left field line were obstructed view because of the owner of the hat that features prominently in the foreground of the photo in this post and his three equally obstructive friends.  Teenagers who apparently have a rare medical condition that prevents them from sitting their asses down for more than two minutes at a time.

No, not the story I alluded to in paragraph one.  We decided to try the concession stand. I got a hotdog and a soda (my ballpark go-to), and my partner got chicken fingers and french fries.  The food was delicious. Some of the best we’ve had at a stadium.  However, my girlfriend put her chicken fingers down on the bleachers next to her. A moment later, she sees something move in her periphery and manages to catch an older woman who was sitting behind us as she put her used napkin in my girlfriend’s dinner.

“Well, you did it, so I guess it has to be”, my girlfriend responded.

She then tells me, and I turn around and look at the old woman, and wonder out loud “Exactly how poorly does one need to be raised to think doing that is okay?”

Meanwhile, our friends on Facebook are giving us suggestions on how to handle the situation, including rubbing her nose in it, and chewing some bubble gum, then placing the gum forcefully in her hair close to the scalp, right down at the roots.

Instead, I just keep looking back at her, laughing at “some people just must have been raised by feral wolves”.

After a few minutes, her friend (who I’m guessing was also in her late 50’s) sees the Bravehearts’ mascot and gets very excited.  She makes her friend get up to go get a picture with Jake the Lion.  When they got up, my partner and I decided that we had enough of the game and were ready to head home.  We got up, and I put the chicken fingers (with her gross ass napkin) on her…well, okay, in her handbag which she had left at her seat.

So, friends, you can see what I am regarding the prospect of Triple-A baseball in Worcester with trepidation.