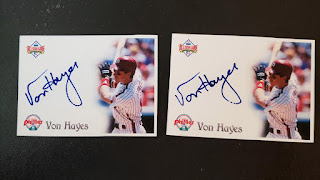 Von Hayes never had a chance.  He was a talented young player in the Cleveland system, and the Phillies bet the house on him.  He had a pretty good career, but between the talent the Phillies gave up for him and the void left by the 1980 & 83 team cycling off the roster, he just never really had a chance to fulfill his potential in Philly.

Hayes was a scapegoat for a lot of the issues that plagued the Phillies in the mid to late 80s…and the 90s.  But, he had a decent career.  The funny thing is, that for all the Phillies stuff I collected and watched in the 80’s, I never had much in the way of Von Hayes.  I didn’t have any cards beyond what I had to fill sets, no autographs, nothing.  Fortunately, that’s corrected here with a couple fantastic blue sharpie signatures on a copule custom cards.