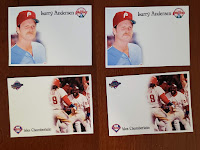 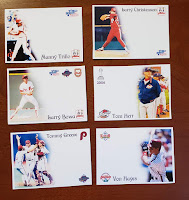 One of the benefits of my job is some schedule flexibility.  So I ended up with an impromptu day off.  That let me get some new cards out in the mail.

I’m continuing the Phillies custom series that brought back Bobby Shantz and Pat Neshek in under a week.  Unlike the design, and I think when I get returns in the multiple of 9s they will look real sharp in pages.

This batch features some of my favorite childhood players.  Larry Bowa made a searing impression on my childhood, and an everlasting image of him Bose to nose with a revolving door of umpires.

Von Hayes I think was a scapegoat for a lot of fans’ frustrations over mismanagement in the mid to late 80s, and a broken arm prematurely ended what could have been a much brighter career.

Manny Trillo I remember vaguely from the pages of Phillies’ Today, the game day program and scorecard.

Wes Chamerlain was a great off the bench guy in the 93 postseason run, which is still my favorite year of Phillies baseball.

My favorite memory of Larry Anderson comes from a highlight video. In the video he finds a Hair in a Can spray and applies it hilariously badly.  Since retiring, LA has turned into one of my favorite broadcasters.

Tommy Greene pitched a no hitter in 91 and was a mid-rotation guy for a stout 93 team.

All the addresses I used came from SportsCardForum.  These guys seem to be returning pretty quickly, so we may have some new additions to the TTM HOF page in the next week or so.