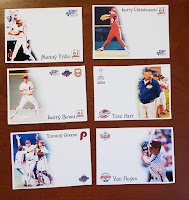 These six cards are a continuation of the “set” I started with Pat Neshek and Bobby Shantz last week.  three guys from the 80’s and three guys from the 90’s.  All six guys have short turn around times according to the TTM Database.  Add these to the Neshek I’m hoping to get back soon and the two Shantz’s I got on Friday, that is a heck of a first page for a TTM book.

I’m starting with Manny Trillo, who was the 1980 LCS MVP for the Phillies.  He’s been returning inside of a month pretty consistently.  Larry Christenson went 5-1 in the regular season in ’80.  He was also the starting pitcher in the Saturday Night Special game, the one time in Phillies’ history when the team ran onto the field wearing red tops & bottoms.  Larry Bowa is one of two people who were members of the 1980 and 1993 Phillies’ world series teams.  The other was John Vukovich, who sadly passed away several years ago.

Tom Herr and Von Hayes both played for the post-glory days Phillies, which is when I started to come of age.  I remember Tom Herr being featured pretty prominently in Herr’s Potato Chip ads.  This card features a photo of Tom Herr when he was manager of the Lancaster Barnstormers of the independent Atlantic League.  Von Hayes was part of an infamous 5-for-1 deal that sent Manny Trillo and Julio Franco to Cleveland.  Hayes came in with huge expactations and never got his feet under him playing at The Vet.  He struggled and became the poster child for the team’s mid to late decade failures.

Tommy Greene threw a no-hitter in May ’91.  He was the first pitcher to no-hit the Montreal Expos at in Montreal.  Two years later he would be part of a blue collar team that took Philadelphia to the World Series.  It was, in my life time, the most exciting time to be a Phillies fan.  The 2019 Phillies have me nostalgic for the ’93 squad.  I’m as excited this year for Harper and Realmuto and Nola as I was for Kruk and Daulton and Curt Schilling.