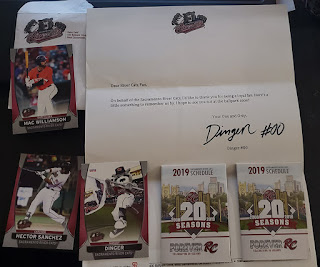 This is the longest return so far (very small sample set, obviously), but I’m going to guess that it was a much shorter turn around as the minor league season did just kick-off in the last few days, and it’s unlikely the Cats had much staff in the offices in the off season.
The River Cats have been incredibly successful since joining the PCL in 2000 and are the only Pacific Coast League charter city still represented in the league.  Ironically, moving to Sacramento in 2000 after leaving another original PCL city as the former Vancouver Canadians.
If you look through the TTM database on SportsCardForum.com, the River Cats are not exactly a hotbed of activity – this is the first attempt & success in almost a year.  But since it was just an email, more than worth taking a flyer on getting a return from them.  Considering it doesn’t seem like they’re a popular target for fan pack requests, it was pretty cool to get something from them.
The pocket schedules have a great design and has a logo celebrating the team’s 20th season in Sacramento.  They promote a couple weekly events including weekly “bark in the park”, fireworks and kids run the bases/player auto session days.
The three cards are from a very nciely designed 2018 Fans Choice team set.  The mascot card has a great photo of Dinger.  Mac Williamson has ping-ponged back and forth between Sacramento and San Francisco, and Hector Sanchez, who’s had a couple cups of coffee in the bigs recently signed with the Atlantic League’s Long Island Ducks.  The form letter, signed by Dinger is little more than a “thanks for rooting for us”.  But it is aimed at kids, who I would suspect would be thrilled to get a letter from their favorite mascot.
Previous

Book Preview: The Case for Barry Bonds in the Hall of Fame by K.P. Wee

In Response to Dan Schlossberg’s Editorial on Politics in Baseball