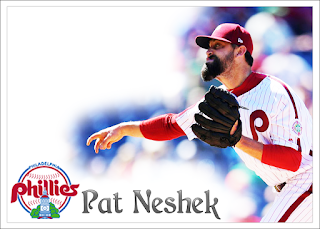 Keep your Bryce and J.T.  Keep your Segura and Nola.  Pat Neshek is my favorite Phillie.  Just like John Kruk was my favorite Phillie during the 93 World Series run.  Pat, I think, may be the best reliever on the staff, but it’s possible he’s under rated because he pitches like a a modified Sunday league guy that got lost on his way to buy an order of Crab Fries from Chickie & Pete’s.  His side-slinger delivery, which I think is a thing of beauty, and how most of us post-prime players would throw, matches his off the field personality perfectly.  Off the field, Neshek is known as one of the top card & autograph collectors in the league.  He loves baseball cards, and in a way that comes off incredibly wholesome loves his own cards.  It would be easy to see a guy that is his own PC as a egomaniac.  But Pat’s genuine love of the game and the hobby erase all sense of pretense.
So when I decided to get back into collecting autographs and thought about TTM’ing, he’s the first guy that came to mind.  I wanted to pair this TTM collection with another hobby of mine, which is designing custom cards.  So I put together this custom Neshek design – which is the base for a frankenset that I’m starting.  I found a great picture of Neshek wearing the mid-80’s throwback (which is still my favorite Phillies logo & uniform set), and matched it with the throwback logo.  That’s the logo I grew up on, and I miss the fat maroon P, as I think most Phillies fans my age do.

For the design of the card, I wanted something clean, and light.  Something that would have plenty of room for an autograph and possibly an inscription (stay tuned for a couple Bobby Shantz cards).  This picture also gives the card a little bit of an artistic mood, too.  The way the fans in the background almost wash out into kind of a watercolor style, really caught me the right way.

I printed up a sheet of these.  I’m sending 2 to Neshek in the next couple of days, I’m going to give him one for his PC, and ask for one signed in return.  I’m also going to keep a clean one.  So, if you’re a custom card designer and you’re interested in having one of these in your custom collection, let me know.  I’d love to trade.  My offer is that I will never print any more than the 6 that I have now.  I’ll have 2, Pat Neshek will have one, which leaves 3 for circulation.  If you’re interested, send me a message via the contact page.  Here’s my warning, they were hand cut and the card stock is not quite as thick as a standard trading card.  That said, if you like the design, they came out very nicely.  I am incredibly proud of the finished product, and am very excited to get one signed and returned. 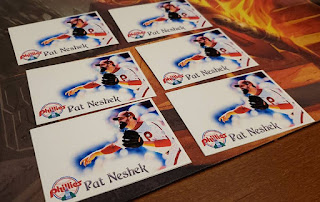