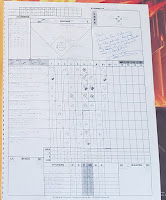 Sean Aronson hosts a podcast called The Voice Behind the Voice where he interviews sports broadcasters from across the country.  Being the St. Paul Saints’ play by play guy, there is a heavy midwest influence, but as a fan of sports broadcasters, it’s great to hear the story behind how people end up in the broadcast booth.

The story behind this return begins with a TTM group on Facebook (I wish I had bookmarked the post).  Someone else came up with the idea of writing to broadcasters and asking for an autographed scorecard or game day notes.  As someone who has worked in a couple broadcast booths, I’m always fascinated by how other (more successful) guys keep their thoughts organized.  So I absolutely stole this idea.  Kudos and credit to whoever came up with it.

I emailed Sean via the address listed on the Saints’ website, and we had a very nice exchange.  He told me he liked the idea of singing a scorecard and said he wishes he had thought of having all of his podcast guests sign something (he does all of his interviews in person and refuses to do “call-ins” via Skype).

I knew that Sean was going to photocopy a scorecard, so I wasn’t disappointed that it was a photocopy (I don’t want to have expectations for TTM’s, particularly when it’s subject-generated and not a classic return), but I was actually surprised because Sean did give me both sides of the card, and it looks like he gave me possibly his favorite game of the 2018 season.  If you look at the linescore, the Saints put up some crooked numbers and a 10-run inning against the Goldeyes on this day.  Sean also put a very thoughtful inscription on the autograph, touching on a conversation we had about my experience behind the microphone.  I’m genuinely touched that he would put that much consideration into this autograph for me.

Some of My Memorabilia Displayed at Norton Public Library